“A Christians dealing with human hurts, we have to remind ourselves again and again that we are not called to be successful, but to be faithful. Our first directions come from the way Jesus told us to live, not from what we think will work.”

More with Less was published in 1976, when the Mennonite Central Committee asked every Mennonite household to cut its annual food budget by 10% in order to live more simply and share more generously.

40 years later, her words carry even more insistence – while there are 200 million fewer hungry people in the world today, huge progress toward the UN’s Millennium Development Goal of cutting the numbers of hungry people in half – the ways we eat here in America are still filled with processed, nutrient-poor fast and convenience food.

I know that I treat food as convenience more often than I recognize it as nourishment. I live alone and work from home, so food is often a good reason to get out of the house – I’ll walk downtown for lunch, take my laptop to the coffee shop for a latte and pastry while I work. I meet people over meals or coffee because that’s the easiest and least intimidating way to schedule a pastoral visit.

Because I’m a single person, meals often become drive-by, drive-through experiences. It seems ridiculous to simmer something on the stove all day long when I’ll be the only one eating it. It’s hard to do home-cooked single servings, but the pre-packaged salads at Target (strawberries and goat cheese!) and the (mouthwatering) al pastor from the ever-present taco truck in my neighborhood are perfect for solo mealtimes.

But neither of those fit the $4/day SNAP budget. In fact, the budget doesn’t even make room for a single, regular coffee outside my own house. So, this week, I’m cooking big batches and – with Longacre’s words ringing in my head and reminding me of all the times Jesus told us to give, share and offer what we have – figuring out how to share both the food and the time.

Yesterday was the first day of the challenge. I’ll write later about how the meal planning and shopping went over the weekend (annoyingly, to say the least), but here’s a report from Day 1:

A gigantic container of quick-cook oats was $2 at Aldi, and Good & Cheap has a four page spread of interesting ways to cook oats, so oatmeal for breakfast it shall be this week. Yesterday was a trial run: regular oats jazzed up with apples, cinnamon and brown sugar. It was….bland.

BUT. My boyfriend was here, after a horrendous day of saying an unexpected and heart-wrenching goodbye to his beloved dog, Isaiah, on Sunday, and so I got to share the very first meal of the challenge with him.

That sharing turned out to set the tone for the day, too. I had butternut squash from one friend and a soup recipe from another, and planned to make that for dinner. While the soup simmered, I remembered gifted bananas, too, and whipped them right up into some banana bread. I had plans to visit a church friend recovering from surgery in the afternoon, and wanted to take some comfort food along, so after I ate my own serving, I wrapped up half the loaf and a tupperware full of the soup and took it with me.

It was so satisfying to be able to feed sad and sick friends, even on a tiny budget.

I have a standing Sunday potluck dinner date with my friend Lauree, but Sunday’s schedule got a little wonky, so we switched our dinner to Monday. I was uncertain what I’d be able to contribute on such a small budget, but even after eating and sharing the soup for lunch I still had SO MUCH, that I took soup and banana bread to dinner, too.

I told Lauree about the Challenge, and joked that the potluck meal would be totally blowing the budget, and that I’d have to explain the photos when people saw how richly I was eating. Her response, though, was “What do you mean? I didn’t spend ANY money on this food!”

And, you guys, other than pantry staples, it was kind of true. Lauree grew up on a farm, and her entire yard – front, side and back – is like a Garden of Eden. She grows everything imaginable, including both fig and persimmon trees (the epitome of luxury, it seems to me, not to mention the biblical resonance with Micah 4:4). She had made a soup with mushrooms she’d harvested from her incredible front yard garden, cooked up some homegrown squash and slathered it with the delicious fig jam she makes from her own fig trees. We did have wine, but it was from Aldi – $5/bottle. No breaking the budget, here.

So. Here’s the barely processed lesson of Day 1: Our first directions come from the way Jesus told us to live, not from what we think will work.

I did not think that this budget would work. I still don’t. In fact, I got hungry yesterday afternoon and cheated by eating snacks I found in my pantry, not included in the budget shopping. But as it turns out, sharing what I have makes things so much easier. I discovered that the soup I had hoped to last only me for three or four lunches is going to do that AND so much more.

I suppose, technically, sharing my food would expand my budget. I ate with another person at each meal yesterday, so I think that could legitimately up my weekly allowance another $3, which would easily cover my afternoon snack.

“Give to all those who ask of you,” Jesus says. “Give as freely as you have received.” “Give, and it will be given to you.” Okay, okay, Jesus. It’s making some sense. 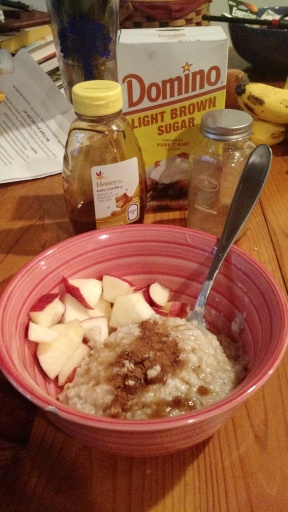 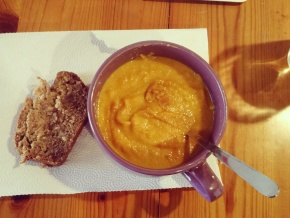 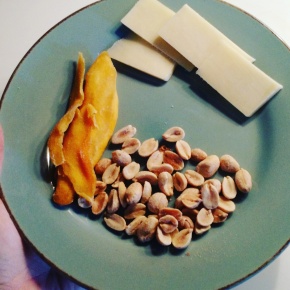 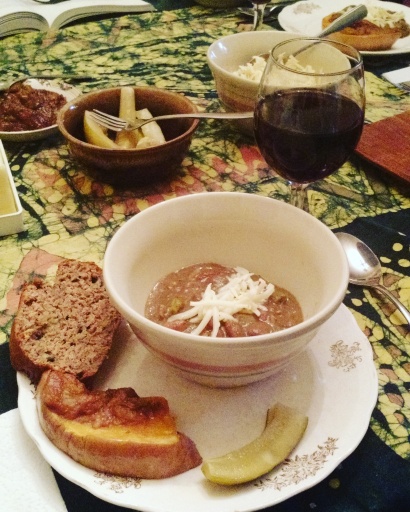