Jean Vanier had been a naval officer, completed a PhD and had a position teaching philosophy at the University of Toronto when he quit his job, bought a run-down house outside of Paris and invited two men with learning disabilities to live with him. Vanier had met the men, Raphael and Philippe, during visits to an asylum, a connection that he had made through his mentor Father Thomas Philippe, who had founded a community in France for searching young people.

That single decision – to live in community with men whose lives were being lived in sterile institutions – turned into a global movement. Today, L’Arche – which is the name for these intentional communities that include core members who live with physical and intellectual disabilities and their companions – has 150 communities in 38 countries. Over 3,500 people with disabilities live in community.

Vanier was not only a do-gooder; he wrote and spoke often about how this kind of life – so different from what his well-to-do Canadian family expected of him – transformed him. He not only believed and insisted that people with disabilities were intrinsically worthy of inclusion and care, he held that theirs was an essential contribution to a well-lived life:

“The cry of people with disabilities [was] a very simple cry: do you love me? That’s what they were asking. And that awoke something deep within me because that was also my fundamental cry…I began to understand that these people could help me grow in the wisdom of love. They would help me grow in a relationship with Jesus.”

“The mystery of people with disabilities is that they long for authentic and loving relationships more than for power.”

Those lines are from a book that Vanier co-wrote with the theologian Stanley Hauerwas, called “Living Gently in a Violent World.”

Jean Vanier died this week, at the age of 90. He lived in community in the original L’Arche community outside Paris until just a couple of weeks ago. In the wake of his death, many are reflecting on his impact. Krista Tippett, host of the radio show “On Being,” is one of them:

“Sitting with Jean was a transformative experience in and of itself,” Ms. Tippett wrote. “We called the show we created with him ‘The Wisdom of Tenderness’—a wisdom that radiated, [was] embodied, in his presence. Yet this tenderness was also a form of power, as paradoxical and true as the Gospel teaching the L’Arche communities took up as a way of life—that there is strength in weakness, light in darkness and beauty in what the world declares broken.”1

Jean Vanier knew that weakness was holy, that vulnerability was the way of Jesus, that the way of the cross is the way of tenderness and gentleness.

I’ve been thinking about Vanier this week, in part because I have shared part of his story at least three times each year for the last decade when I work with new volunteers entering Brethren Volunteer Service. Vanier’s story of taking a road less traveled, deciding to cast his allegiance and his life alongside the ones that the world deems broken, is instructive for young people, especially, who are entering into years of direct service with people that they have likely been disconnected from all their lives. Patience, gentleness, tenderness, celebration: these are virtues that are hard to practice in our world today. BVS asks volunteers to find time to nurture them. Vanier lived a life filled with them.

And, believe it or not, our text from Revelation today is filled with encouragement for those of us who strive to live these kind of gentle, vulnerable lives in the face of the overwhelming violence of the world today.

If you remember where we left off last week in our introduction to Revelation, John – whose vision we are experiencing – had been taken up into the Spirit and found himself in a dazzling throne room – filled with beasts and colors and gems and singing. And you remember that seated on that throne, the object of everyone’s intense devotion and worship was – surprisingly – a tiny, vulnerable, slaughtered lamb.

The lamb is the one who is able to open the seven seals that are keeping closed a very important scroll, and when the seals are opened, very, very strange visions ensue. Each scroll leads to a very trippy vision: different colored horses, with riders; a host of people who had lost their lives because of their witness, dressed in white robes and crying out for justice; an earthquake, during which

“The sun turned black like sackcloth made of goat hair, the whole moon turned blood red, 13 and the stars in the sky fell to earth, as figs drop from a fig tree when shaken by a strong wind. 14 The heavens receded like a scroll being rolled up, and every mountain and island was removed from its place.”

And then there is a very interesting vision where John sees exactly 144,000 people who are “sealed” as servants of God: 12,000 people from each of the 12 tribes of Israel. These 144,000 seem to be still on earth, and the “seal” seems to mean that they will not be harmed when great danger comes.

The book of Revelation has been used and abused in a lot of ways, and this particular passage, about 144,000 people who are sealed as God’s servants is no exception. You’ve probably heard some of the interpretations of this number: Jehovah’s Witnesses believe that the number means that exactly 144,000 faithful Christians from Pentecost until the present day will be resurrected to heaven – all other believers will get to live in a Paradise here on earth, but those 144,000 will live as priests and kings with God in heaven.

Another way of understanding the 144,000 is to believe that they are Jewish people who have converted to Christianity and will do the work of converting other gentiles on earth before the end of the world. There are a couple of problems with this idea: first, we learned last week that John, the author, was himself a Palestinian Jewish Christian – in those days, “christianity” was not a separate religion. Everyone was Jewish. Second, this line of thinking easily leads to antisemitism and supercessionist theology – which is a way of dismissing Judaism and the Jewish faith altogether by insisting that Christianity took over the place of Israel in being God’s special people. This is messy and complicated.

It is odd that John names such a specific number of people here, and links them directly to the twelve tribes of Israel. But just like he did before, when he set us up to see a fierce, conquering lion on the throne, John is about to surprise us again with God’s truth:

“After this,” he says, “I looked and there before me was a great multitude that no one could count, from every nation, tribe, people and language, standing before the throne and before the Lamb.”

Did you get that? A multitude so huge that no one can count it! It’s like John knew that people would get hung up on that 144,000 number, try to assign each one a specific identity, spend millenia deciding if WE are among that 144,000…and so he immediately turns us upside down: a huge multitude, from every nation, tribe, people and language. And all these people are dressed in white, and they are – get this – worshiping. Worshiping who? Right. The Lamb. 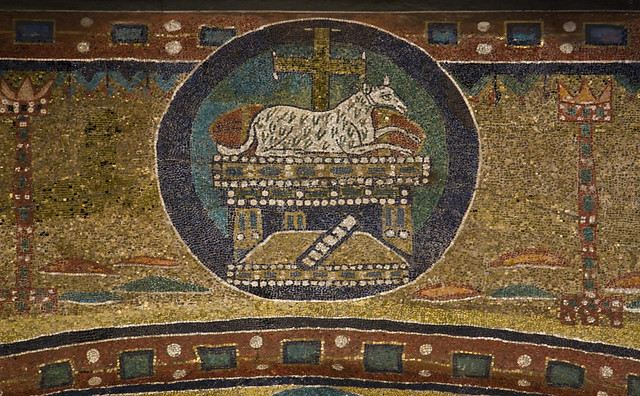 Detail from the triumphal arch mosaic of Santa Prassede in Rome. By Lawrence OP

One of the elders turns to John and asks him if he knows who all these diverse, white-robed worshipers are, and John says, “dude: YOU tell ME!” And the elder does:

“These are they who have come out of the great tribulation; they have washed their robes and made them white in the blood of the Lamb. 15 Therefore,

“they are before the throne of God
and serve him day and night in his temple;
and he who sits on the throne
will shelter them with his presence.
16 ‘Never again will they hunger;
never again will they thirst.
The sun will not beat down on them,’
nor any scorching heat.
17 For the Lamb at the center of the throne
will be their shepherd;
‘he will lead them to springs of living water.’
‘And God will wipe away every tear from their eyes.’”

This multitude of white-robed heavenly worshipers are the ones who have been witnesses to the Lamb: not merely “believers,” but people who have endured tribulation because of their desire to follow in the way of the Lamb on the throne.

Because the lamb is not only the conquering Christ, worthy of praise and glory and wisdom and thanks and honor and power and strength; the lamb is also the model and example, the way, the truth, and the life. To become witnesses to this conquering lamb, these worshipers in white robes have participated in the paradoxical power of vulnerability, gentleness, and tenderness. They have lived lives that emulated the slain lamb. And that – their commitment to the way of surprising tenderness in the face of great violence and tribulation – has led to persecution, oppression, pain and deep sadness.

And if anyone understands that, it is the lamb himself, who inhabits the throne not as a perfect, wooly specimen of health, but in the fullness of what happened to him – the lamb is on the throne, John says, “looking as if it were slain.” Just like Paul records, “my grace is sufficient, my power is made perfect in weakness.”

So, John sees the gathered multitude from all tribes and nations, people from every age and every background, every possible incarnation of human being, gathered around the throne of the Lamb, worshiping him. And the elder, who has revealed to John who they are, says that they are here so that the one

John is quoting the prophet Isaiah, here. And he’s quoting specific portions of Isaiah, known as the “suffering servant” verses. These passages detail a Messiah who comes not as conquering war hero, but as suffering servant, the one who, as the beginning of the chapter quoted here says,

“was despised and abhorred by the nation,
to the servant of rulers:”

God says to this suffering servant:
“Kings will see you and stand up,
princes will see and bow down,
because of the Lord, who is faithful,
the Holy One of Israel, who has chosen you.”

And so it is with the great multitude of diverse people – from every nation, tribe, age and place: they will find their place worshiping the conquering lamb who was slain, resting in the promise that never again will they face hunger or thirst, because the lamb – the wounded, suffering, slain lamb – has become their shepherd, and “he will lead them to springs of living water, and God will wipe away every tear from their eyes.

When we start to see the lamb on the throne as our shepherd, when we begin to imagine ourselves as part of that great multitude that no one can count singing our praise to the conquering, slain lamb, perhaps we might discover, too, what John had revealed to him there in the throne room, which was the same truth Isaiah tried to make clear in his prophet’s vision, he same truth that Jean Vanier lived out in his lifetime of learning to value weakness and love the brokenness of humanity the same truth that Paul articulated over and over in his letters: