I spent most of last week in the desert of Scottsdale, Arizona at the COB Clergy Women’s Retreat. Over 60 women in ministry gathered for rest and renewal surrounded by cacti and images of Mary at a Franciscan Retreat Center. 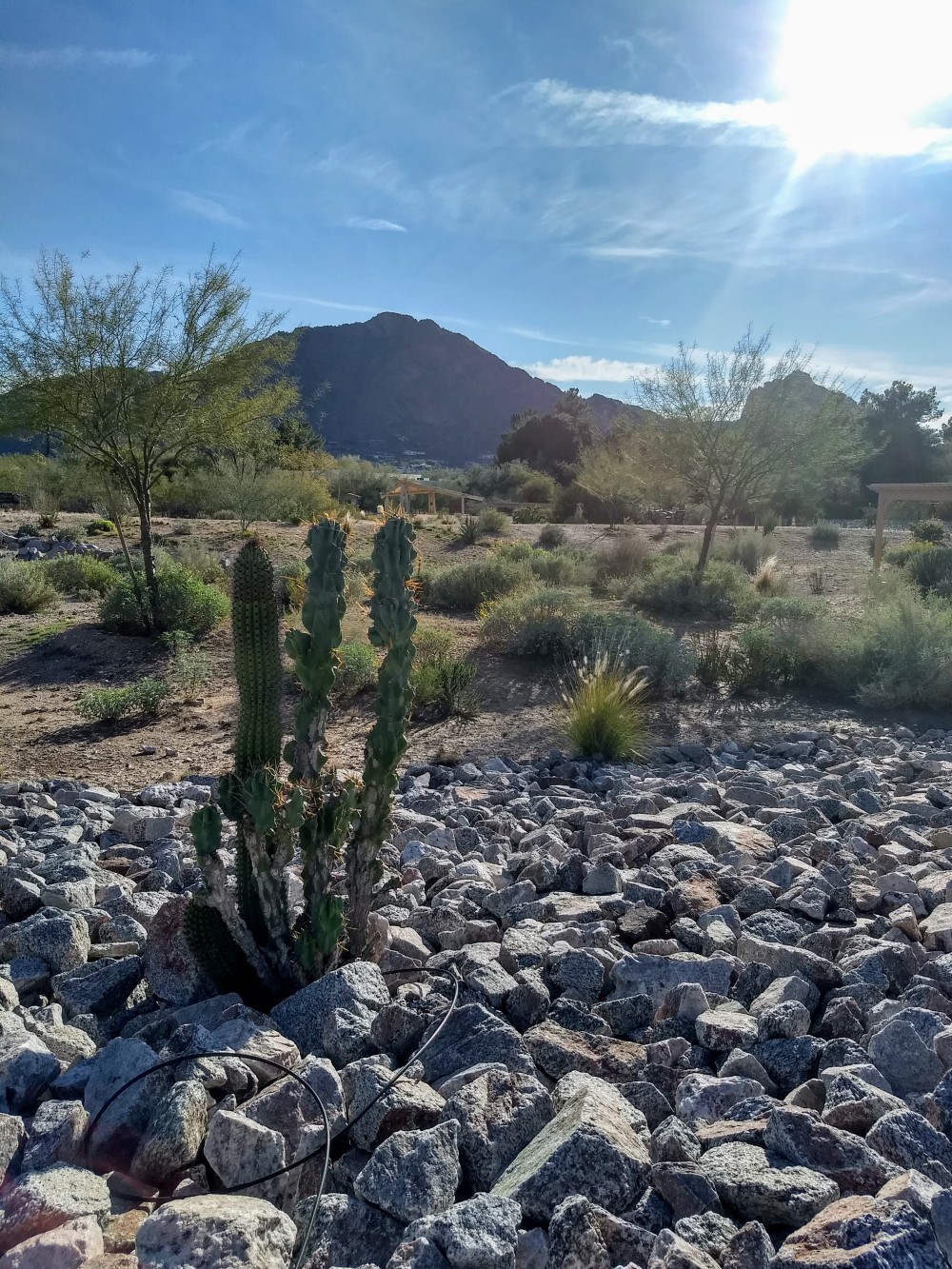 The desert was an odd place to be reflecting on this text filled with water. Matthew tells the story of Jesus baptism well into the scene of John hanging out by the Jordan River. John has been out here in the Galilee, baptizing people from Jerusalem and Judea and all over the region for, he is preaching, the repentance of sins. People streamed out to the river, confessed their sins, and waded into the healing waters of the Jordan. John has even had a run-in with the temple officials who heard about what he was doing and came down to the river to chastise him. John has been out here in the river for a while before Jesus shows up.

And when Jesus does show up, John is just as scandalized as everyone else. John has been preaching a baptism for THE FORGIVENESS OF SINS. People have been drawn to his preaching because they have sensed a deep need to confess their brokenness, their inadequacies, all the ways that they have not lived up to what they’ve been taught that God expects of them. This baptism that John has been called to initiate has been a practice for HUMANS – limited, conditional, contradictory beings who feel their smallness way down deep inside.

This baptism of water for repentance is not for divine beings. John was announcing the coming of the Lord, the one much more powerful than he, the one who would baptize all those hateful temple officials and oppressive political leaders “not with water but with the Holy Spirit and with fire.” John’s entire ministry has been about preparing the way for the Messiah, the one who has winnowing fork in hand, ready to separate the wheat from the chaff and burning up all the useless material with unquenchable fire.

That coming Lord is Jesus. John knows it – he encountered his own Lord while they were both in utero and their moms shared strength during difficult pregnancies. So when Jesus – the Lord, the one who is supposed to show up not TO BE baptized but to officiate an even more intense baptism himself – shows up down at the Jordan, John protests.

“I need to be baptized by YOU, Jesus! What are you doing getting in line and wading into this river with all these small humans?”

But Jesus – always the one to upend every possible expectation about what it is to be Lord and Savior – says “let it be so now; it is proper for us to do this to fulfill all righteousness.” So, John consents, Jesus steps out into the water, and John prays over him and dunks him (there have literally been long, involved arguments about whether or not John would have dunked Jesus forward or backward, whether he would have immersed him once or twice or three times, or whether John just splashed Jesus a little over his head and called it good…).

Jesus – the coming King and Lord for whom John was preparing the way, the one whose SANDALS John felt unworthy to carry – asked John to baptize him…for the repentance of sins. And John, after protesting and arguing, agreed.

What is up with that? Why did Jesus get baptized? In this story from Matthew, Jesus hasn’t even reached the part of his life where public ministry is a thing – all we know about Jesus up to this point is a spectacular birth and a couple of glimpses of precocious childhood. Surely Jesus didn’t need to CONFESS any SINS, right? Why does he wade into the water and insist that John baptize him?

Our leader at this week’s retreat was a pastor from Cincinnati named Mandy Smith. She led us through contemplating what it means to be vulnerable in ministry. Her book, The Vulnerable Pastor, is a reflection on all the ways that showing up as a woman in an industry and profession dominated by men has required her to come to terms with the blessings of vulnerability in leadership.

At first glance, that seems contradictory: we don’t want our leaders to be vulnerable, right? We want strong, courageous, brave, bold, confident leaders. Go to the local bookstore and browse through the leadership section and you will not be likely to find much help understanding the value of vulnerable leadership.

Except church leaders – those of us who model our lives on the example of Jesus himself – aren’t necessarily tied to the assumptions about leadership put forth in the rest of the world,are we? Mandy told us this story about one situation where she was invited to understand the power of vulnerable leadership.

She is the lead pastor of University Christian Church in Cincinnati, and one morning several years ago she had a very important meeting to lead, first thing in the morning. The meeting had to do with the future of the congregation, and all of her staff and leaders would be there. The week was a busy one and she hadn’t been able to prepare as much as she wanted ahead of time, but she figured she could come in early that day and get a couple of hours’ work in before anyone else arrived in the building.

Except on the morning of the very important meeting, Mandy had a rip-roaring fight with her husband at home. “We don’t fight very often,” she said, “so when we do, they’re real doozies.” She got to the building early, still hoping to do her meeting prep-work before anyone else arrived. But to her dismay, she walked in and immediately encountered her (male) associate pastor.

She mumbled a hello before grabbing tissues, eye drops and mascara and running to the bathroom. Her plan was to wash her face, remove all traces of the tears and puffiness from the morning argument, put her stiff upper lip in place, and fake composure through the meeting. But something stopped her. When she got to the bathroom, some compulsion toward authenticity and vulnerability turned her around. She walked back out into the hallway.

Her associate pastor noticed – how could he not – that she was upset. “Is there something I can help with?” he asked. She gave him the abbreviated version: a fight with her husband that morning left her upset, distracted, and ill-prepared for the very important meeting. The first thing her associate pastor did was ask if he could pray for her, and then he did, right then and there. And then, he said that he’d actually had a really great brainstorm about the impending meeting, and offered to take the lead in the very important meeting. Mandy agreed.

When she told this story, Mandy reflected that her uncomfortable choice to be honest and vulnerable with her associate pastor opened the door for at least three transformative things: first, he saw that she was not superhuman, that her family was just as complicated and difficult as everyone else’s. Second, the associate pastor had the opportunity to minister through prayer – and if you’ve had that opportunity to pray for someone else in the moment and in their presence, you know how much of a blessing and honor that can be. And, thirdly, Mandy realized that God – in God’s perfect wisdom – had the foresight to give the inspiration for the very important meeting not to her in the midst of argument, upset, and chaos, but to her associate pastor. By stepping out of the way, she had made room for God’s guidance to arrive as planned.

When I heard Mandy tell that story, I thought about this morning’s scripture. Why in the world did Jesus – savior of the world, the one coming to baptize with the Holy Spirit and with fire – submit to John’s baptism?

Well, is there any greater example of a leader embracing vulnerability than the story of the God of the universe choosing to take on human form? Asking why Jesus got in line and waded into the Jordan with all those other broken Galilean humans, is really asking why God would become human at all.

Jesus’ insistence that John baptize him just like John baptized the rest of the people in line at the Jordan tells us a lot about the kind of Lord, savior and leader that he is. Jesus is a vulnerable leader – fully human, fully aware of the smallness of being in skin, fully feeling that kind of existential inadequacy that we feel when we think too hard about our place in the cosmic world. Jesus KNEW what all those other people were feeling there at the Jordan – and not in a disembodied, intellectual way. Jesus was also a small, broken human who understood what it felt like to have sensed a deep need to confess our brokenness, our inadequacies, all the ways that we have not lived up to what they’ve been taught that God expects of them. And Jesus understood the grace, the relief, the sense of salvation that comes from confession, repentance, and assurance that we are beloved no matter who we are or what we’ve done.

And here’s the grace of the story: because Jesus was willing to get in line and wade into the waters of baptism with us, we also get to share in God’s reaction to that vulnerable acknowledgement of feeling too small or too inadequate or not having lived up to what we think God expects of us.

Jesus emerges from those waters, the heavens open and the Spirit, in the form of a dove, swoops down and perches on his shoulder. And a voice, from heaven, says clearly: “This is my Son, whom I love; with him I am well pleased.”

That’s what God says when Jesus stood in line, waded into the waters of the Jordan, asked John to baptize him, confessed, repented, acknowledged his human smallness and submitted to the inescapable vulnerability of living in skin and bones.

God isn’t disappointed that Jesus didn’t put on a stiff upper lip, gather his cloak and hightail it off to some far-away throne to rule from a distant place of power.

God isn’t upset that Jesus got all emotional instead of offering to relieve John of his post.

God is not pissed off that Jesus showed cracks in his armor of being Savior of the World.

God is well pleased in us when we admit our vulnerability, when we ask for help, when we move aside to see who else might have word of grace or assurance or pardon or guidance for us.

God is well pleased when we get in line with everyone else and expect to be simply a part of the crowd.

God is well pleased when we allow another to offer us care.

God is well pleased when we admit that we cannot do it all.

God is well pleased when we learn that we are contingent beings, dependent on God and on one another for every bit of our life.

And that is good news, my friends. Thanks be to God.